This facility has not yet been rated.

Faurot Park
Originally known as the Lake Subdivision was received as a gift on February 4, 1904 and at that time was called City Park . The Faurot Park Addition was acquired as a gift on September 12, 1935. The consolidated 86-acre tract was then named after the original discoverer of oil in Lima (Benjamin Faurot) who died a poor man although he contributed greatly to the wealth of others. During the early days of Faurot Park there was in fact a zoo on the grounds. The zoo housed several animals including bears, deer, monkeys, coyotes, alligators, fox, elk, snakes, owls, eagles and more.
Present day Faurot Park is 89 acres of green space which includes seven ball diamonds, four shelter houses, four lakes, a concert pavilion, two playground areas, three sand volleyball courts, a cross-country running course, a skate park, the children’s fountain/splash pad and is home to the annual Star Spangled Spectacular.  With an abundance of green space, Faurot Park lends itself to a quiet picnic in the park or a day of recreational enjoyment. 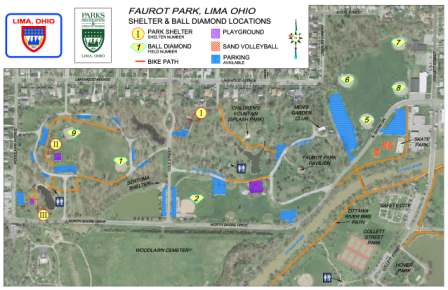