What began as a Quonset hut to store a 1929 Ahrens-Fox fire engine and a circa 1800's horse drawn steamer has materialized into the beautiful Lima Firefighters Memorial Museum we have today. Located at 180 S. Shawnee at the corner of Elm and Shawnee Streets and adjacent to Number 5 Fire Station, the Museum is an accumulation of time, talent, and donations.

When former Fire Chief John Brookman found out that the Allen County Historical Society no longer had room to store the Fox and the steamer at the Allen County Museum, he began to mobilize an effort to build a storage building so the department could keep them out of the elements for future generations to enjoy. Little did he realize that from those humble thoughts a Museum of this scale would evolve. 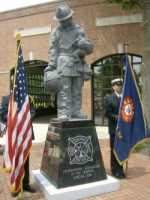 The Museum features a memorial statue with the engraved names of firefighters who have died in the line of duty. A brick walkway around the statute preserves the name and year hired of every firefighter who has served the citizens of Lima. The project was funded entirely by private donations. No tax dollars were used to construct the Museum, or will be used to maintain it. Several Fire Department employees donated their construction skills, saving thousands of dollars off the total price tag.

The Museum is open for school tours and on holiday events. It will tie in with community events and the train exhibit in Lincoln Park.