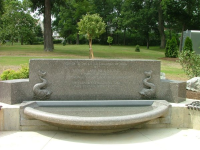 In 1995 the committee tried a unique idea. Cartoons, drawn by local artist Dave Adams, were inserted into the monthly water bills. What these cartoons did was to advertise the fact that Lima was accepting donations from the public to make capital improvements. The cartoons also keep the public up to date on what projects have been completed.

For the public, the process is simple. At the bottom of the monthly water bill, list the amount of donation that is being given. Amounts from $0.10 to $15,000 have been given since its inception. No amount is too small because small amounts add up.

Items approved for purchase by the Building Our Future Committee include: