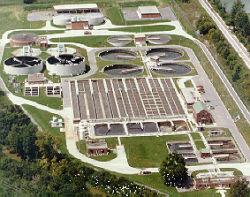 First constructed in 1930, the Lima Wastewater Treatment Plant consisted of screening, grit removal, primary sedimentation, and anaerobic digestion. Throughout the years, secondary treatment, tertiary treatment and additional sludge digestion were added. In 1973, the plant was expanded to an average dry weather flow capacity of 18.5 million gallons per day (MGD) , and a peak flow capacity of 53.0 MGD. The design concept called for secondary and advanced treatment portions of the plant to operate at a peak rate of 33.0 MGD, with any remaining flow receiving primary settling and chlorination. Since 1973 the plant has provided primary, secondary and tertiary treatment, as well as biosolids recycling.

Primary treatment consists of screening, chemical treatment, grit removal and primary settling. Plant influent is first treated by three self cleaning bar screens which remove debris greater than 1/2 inch in diameter. After screening, ferric/ferrous chloride is introduced into the flow stream to help in phosphorous removal. Inert matter is removed in two 5000 gallon grit removal tanks. After grit removal, polymers are added to the flow to improve settling of organics. This settling is accomplished in seven primary tanks with a combined volume of approximately two million gallons.

Secondary treatment includes aeration and secondary settling. Primary effluent and biologically activated sludge are mixed and flow through one of five aeration basins. The aeration basins have a combined volume of 5.5 million gallons. After being aerated for approximately eight hours, the flow is routed into final settling tanks where the remaining organic solids are removed. Total volume of final settling is 4.5 million gallons.

Tertiary treatment is provided by two nitrification towers, disinfection through the use of chlorine, and de-chlorination. Nitrification towers for ammonia removal were built in 1973 and were the first municipal installation to utilize the packed tower process. These towers have successfully met the plant's discharge permit conditions without the need for final filtration or sedimentation. Chlorine is applied to the tower effluent for disinfection. Sodium bisulfide is added to the final effluent to remove any remaining chlorine prior to discharging the treated water into the Ottawa River.

Anaerobic digesters treat the organics which have been removed throughout the plant. The resulting biosolids product is either dried through the use of vacuum filters or applied in liquid form to surrounding agricultural ground.

Throughout the plant each stage of treatment is monitored and controlled by a computerized process control system (PCS). Lima's wastewater PCS consists of distributed programmable logic controllers which are monitored using a desk top computer network. The PCS provides monitoring, control, alarm notification and logging capabilities for plant personnel.